Using ICP-QQQ-MS, sample aliquots are first introduced through a “high matrix introduction” (HMI) system.  The HMI performs a gaseous dilution instead of a benchtop dilution which increases precision and accuracy. Then, the aliquot travels through an initial quadrupole (Q1), which filters the target masses prior to their entrance into a second chamber.  The second chamber is a collision reaction cell (CRC) which preferentially reacts either with interfering ions of the same target mass to charge ratios or with the target analyte, which can then be differentiated from the initial interferences. This chamber operates in two modes (reactive mode and collision mode). In the reactive mode, the CRC contains a specific reactive gas which preferentially reacts with interfering ions of the same target mass to charge ratios or reacts the target analyte to produce a new molecule that has a different mass than the interferences.  In the collision mode, the cell is filled with an un-reactive gas.  Polyatomic interferences, due to their inherently larger size, are separated from the analyte of interest via kinetic energy discrimination (KED). The ions then exit the collision/reaction cell into an additional quadrupole (Q2), where detected ions are processed by a data handling system.

What sets the ICP-QQQ-MS analytical platform apart from other ICP-MS instruments is the HMI system and the quadrupole that precedes the CRC.  This allows only specific masses to enter the cell, resulting in a more controlled and efficient interference removal in reaction mode. Most mass spectrometers only contain a quadrupole mass analyzer after the sample stream exits the CRC. Furthermore, the support of mass filtering prior to the CRC allows our scientists to scan the periodic table during the analysis of a specific element to ascertain what, if any, interferences are caused by the plasma effects or the interaction of the reaction gases with the ion beam.

Below is an example of an investigation using the mass scanning capacity of the QQQ to elucidate the formation of nitrogen analogues which can interfere with cobalt quantitation. It was determined that calcium analogues were the primary contributor for a positive bias when operating the CRC with ammonia gas. 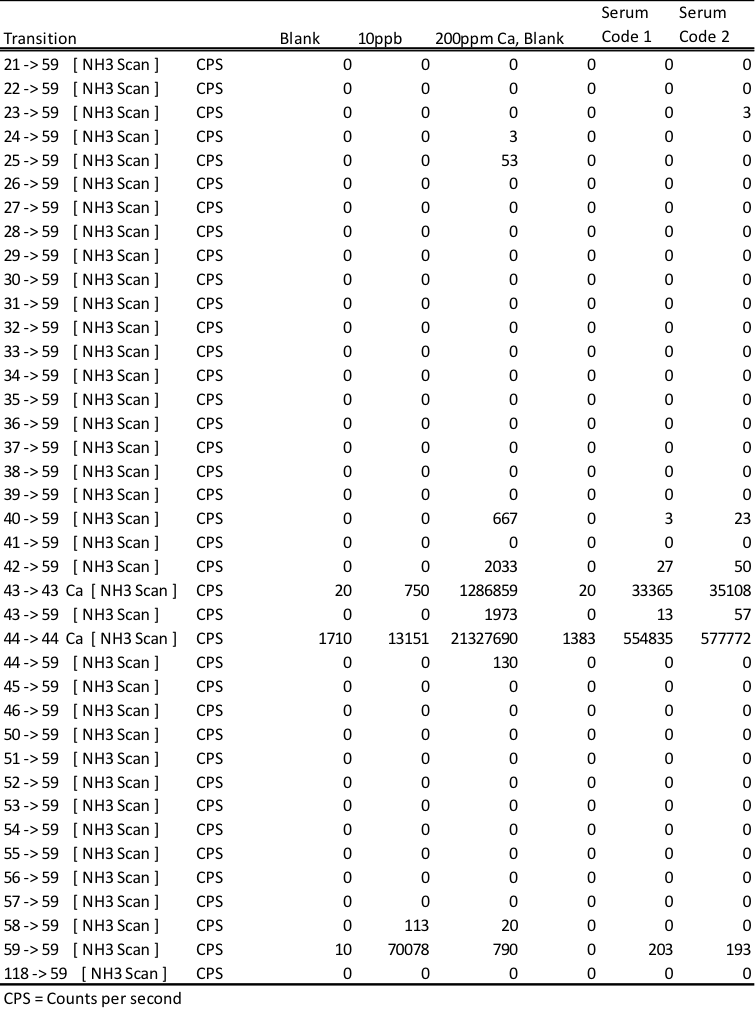 To learn more about our innovative analytical methods and how they can benefit your projects, contact us today.