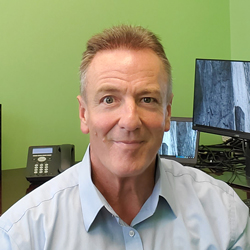 As a child of an army dad, Chuck made a number of moves with his family. They eventually settled in Troy, MI which he considers home. He received his Bachelors of Science in Chemistry from Oakland University in Rochester, MI. Chuck’s career path has taken him from an Analytical Chemist performing GC, GC-MS, ICP, FTIR, AA analytical methods for metals detection, to Laboratory Director at Sterling Environmental Laboratory, to starting up his own lab, Pinnacle Consulting Group, where he served as Technical Director. He then made the move out west to work for Clear Creek Systems as their Branch Technical Operations Manager. Most recently he worked for Lancaster Labs as their Principal Business Manager. As a fellow dog lover, one accomplishment Chuck is most proud of is role in turning the Huron Humane Society animal shelter from a kill to no-kill shelter. In his free time, Chuck enjoys playing guitar.
Back to Staff