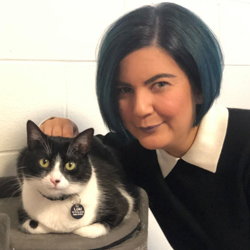 Esther grew up in Caracas, Venezuela where she obtained her Bachelor’s degree in Geochemistry from Central University of Venezuela. Esther’s chemistry background includes working as a soil analyst for the National Institute of Lands – Agricultural National Laboratory of Soils, where she conducted analysis to determine soil fertility throughout Venezuela. She also worked as a consultant for the Venezuelan Ministry of Basic Industries and Mining to map and inspect gold mines and limestone quarries throughout central and southern Venezuela. Prior to moving to Seattle, Esther launched her own baking business, which we all know is tasty chemistry! In her free time Esther enjoys studying languages and going to the movies. She loves cats and helped to rescue and provide food and shelter for many street cats in Venezuela, including the two she brought with her to Seattle, Loki and Thor.