Quality aspects of micronutrients’ role in biopharmaceutical production demands a holistic approach to the supply chain. Minute differences in concentrations of certain minerals in the low parts per billion (µg/L) range can have sweeping effects including increasing titer, meeting specifications, and out of specifications (OOSs). Unfortunately, micronutrients can be present in nearly all aspects of production as contaminants. Thus, a new approach to quality controls and risk assessments are necessary to ensure the viability of processes.

Minute differences in concentrations of certain minerals in the low parts per billion (µg/L) range can have sweeping effects including increasing titer, meeting specifications, and out of specifications (OOSs).

The International Conference of Harmonization (ICH) and Code of Federal Regulations (CFR) provide guidance regarding quality aspects of pharmaceutical drug manufacturing and management. Identification of variables and performing appropriate risk assessments, however, is the responsibility of drug companies. An important aspect of this process, which is often overlooked, is properly identifying data objectives and selecting a CRO that can meet and exceed current and future analytical demands. Brooks Applied Labs uses the some of the most advanced analytical techniques to support the quantitation of elemental micronutrients and contaminants using inductively coupled plasma triple quadrupole mass spectrometry (ICP-QQQ-MS). We are experts in the field of elemental analyses, so you do not have to be. However, if you would like to learn more click here.

Considering, not all pharmaceutical companies have the personnel with the knowledge and experience to not just understand the role of all micronutrients but also how to integrate those variables into their quality systems surfaces a need. Brooks applied Labs can assist with this.

The first stages of quality systems are to identify variables associated with the processes and perform a risk assessment. What variables contribute to micronutrient concentrations? 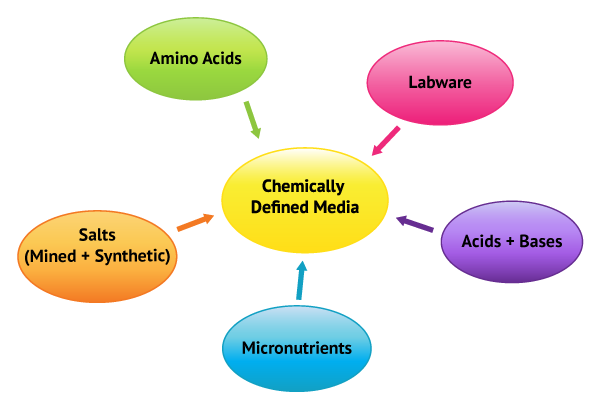 Along with chemicals that are used for chemically defined media all labware can also contribute to micronutrient loading. More often than not, the concept of labware is limited to pipettes, PET bottles, and stir rods. However, it should include all physical materials that come in contact with all powders, liquids, and cell lines. The list can become quite extensive but important, nonetheless. One excellent example of a labware issue BAL encountered was with single use bioreactors. The client continued to experience OOSs and BAL helped elucidate that Cu contamination from the disposable bag was the result. In another instance, a bioreactor manufacturer used high iron stainless steel resulting in oxidation and, as you can guess, continued OOSs.

One excellent example of a labware issue BAL encountered was with single use bioreactors. The client continued to experience OOSs and BAL helped elucidate that Cu contamination from the disposable bag was the result.

One of the most important aspects of quality control for micronutrients is the concept of retains. A retain is a sample that is properly collected and stored for future use in the event that an OOS or pattern of increase or decrease for micronutrients is encountered. Retains allows the quality department to investigate the cause of a problem while minimizing assumptions.

How much material should be collected and stored for possible future analyses as a retain? This brings us to the next variable to understand and that is homogeneity. Impurities in powdered chemicals are inherently heterogeneous up to a specific mass. This is dependent on how the powder was milled, the source of the chemical (synthesized or mined), and level of hydration. If the supplier cannot provide a mass limitation for homogeneity, a study must be performed to ascertain how much material is required to produce a representative subsample. Brooks Applied Labs can help you with this.

The concept of retains and homogeneity are especially important in the R&D phase for biopharmaceuticals. The variable of uncontrolled micronutrients should never be cause for concern whether a cell line failed to produce the anticipated molecular expression. After all, what company would want to miss out on the next billion-dollar blockbuster drug because a handful of samples were not analyzed?

Inductively coupled plasma – mass spectrometry (ICP-MS) is widely recognized as one of the most accurate and precise analytical techniques for the determination of many trace metals in a wide variety of sample types. However, analyses for a small number of these elements using a conventional instrument configuration have also been persistently challenging due to spectral interferences that can severely compromise the accuracy of reported results.

These spectral interferences occur due to the formation of polyatomic ions that have the same mass-to-charge ratio (m/z) as the analytes of interest. This causes erroneously large signals for the intended analyte at the detector and results in unnecessarily elevated detection limits and mistakenly elevated final concentrations.

Polyatomic ions form when the various constituents of the plasma gas, preparation reagents, and the sample matrix combine in the ion beam and prior to reaching the detector. Procedurally introduced elements, such as the argon that fuels the plasma, as well as the chlorine, hydrogen, nitrogen, and oxygen found in the diluents and acids used in sample preparation, unavoidably contribute to the formation of many of these polyatomic ions, even in relatively low-level samples.

The analyses of samples that contain abundant amounts of particular elements, such as calcium, carbon, chlorine, magnesium, potassium, sodium, or sulfur, can dramatically further increase the formation of polyatomic ions to levels that can easily exceed even those of the analytes of interest. Of course, these elements are present in almost all chemically defined media for cell cultures making it imperative to use the best technology available to mitigate analytical bias.

Using ICP-QQQ-MS, sample aliquots are first introduced through a “high matrix introduction” (HMI) system. The HMI performs a gaseous dilution instead of a benchtop dilution which increases precision and accuracy. Then, the aliquot travels through an initial quadrupole (Q1), which filters the target masses prior to their entrance into a second chamber. The second chamber is a collision reaction cell (CRC) containing a second mass filter (Q2) which preferentially reacts either with interfering ions of the same target mass to charge ratios or with the target analyte, which can then be differentiated from the initial interferences. This chamber operates in two modes (reactive mode and collision mode). In the reactive mode, the CRC contains a specific reactive gas which preferentially reacts with interfering ions of the same target mass to charge ratios or reacts the target analyte to produce a new molecule that has a different mass than the interferences. In the collision mode, the cell is filled with an un-reactive gas. Polyatomic interferences, due to their inherently larger size, are separated from the analyte of interest via kinetic energy discrimination (KED). The ions then exit the collision/reaction cell into an additional mass filter (Q3), where detected ions are processed by a data handling system.

What sets the ICP-QQQ-MS analytical platform apart from other ICP-MS instruments is the HMI system and the quadrupole that precedes the CRC.  This allows only specific masses to enter the cell, resulting in a more controlled and efficient interference removal in reaction mode. Most mass spectrometers only contain a quadrupole mass analyzer after the sample stream exits the CRC. Furthermore, the support of mass filtering prior to the CRC allows our scientists to scan the periodic table during the analysis of a specific element to ascertain what, if any, interferences are caused by the plasma effects or the interaction of the reaction gases with the ion beam.

Below is an example of an investigation using the mass scanning capacity of the QQQ to elucidate the formation of nitrogen analogues which can interfere with cobalt quantitation. It was determined that calcium analogues were the primary contributor for a positive bias when operating the CRC with ammonia gas. This is another example how our scientists go above and beyond to understand the benefits and limitations of technologies before application to our clients. 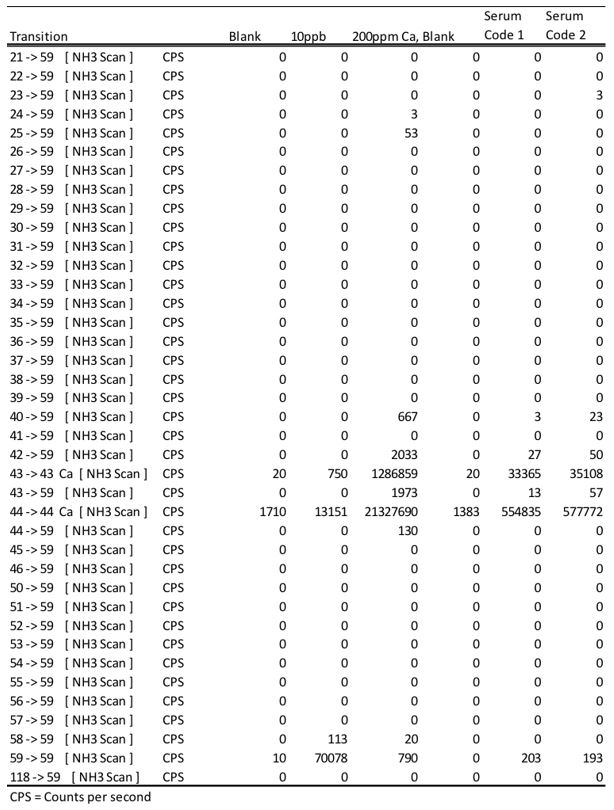 As you can start to see, quality aspects to support all biopharmaceutical product lines concerning micronutrients can be complicated. Rather than make assumptions, why not talk to the experts? Brooks Applied Labs can provide education webinars and on-site seminars to assist your staff in securing your investment. Generating a list of pertinent elements that may be viewed as micronutrients can also be complicated. We can help you with that as well.

From education, variable recognition, contaminant source identification, and analytical services to support all aspects of elemental analyses in your systems, Brooks Applied Labs is your solution provider. If you do not currently have a Master Service Agreement (MSA) with us feel free to contact us to get started. 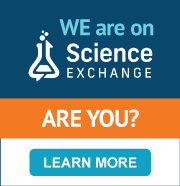