The Importance of Selenium Speciation 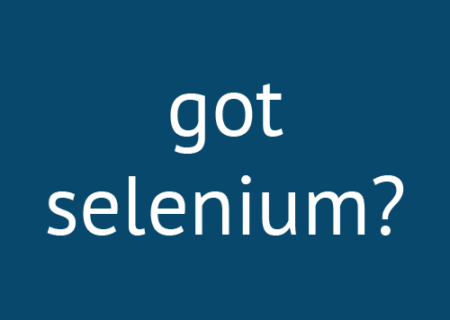 The topic of selenium has garnered attention in various industries for decades now, but the challenge associated with removing selenium from wastewaters has not diminished. In order to understand the most effective form of treatment for this unusual element that is both an essential micronutrient but also toxic at relatively low concentrations, the molecular form, or speciation, of selenium must be understood.

The two most common inorganic forms present in industrial wastewaters and agricultural runoff are selenite and selenate. Numerous treatment options are available for selenite, but conventional options like iron co-precipitation are ineffective for selenate. Several reviews have identified biological treatment as one of the best options for selenate removal, in part because it is cost-effective and has been proven in full-scale installations. Therefore, it is prudent for industries needing to implement selenium treatment and collaborative service providers to characterize waste streams via speciation analysis before and during bench- or pilot-scale studies.

Systems for biological treatment of selenium-laden waters take many forms, but anaerobic bioreactors are one of the most common iterations. In most of these systems, reduction of selenite and selenate to elemental selenium (Se0) is the desired outcome. This elemental selenium is mostly insoluble and can be removed from the effluent via filtration or temporarily retained in the reactor until backflushing of the system can be performed. Well-maintained and optimized bioreactors have been shown to treat industrial wastewaters containing mg/L concentrations of selenium down to single-digit µg/L levels.

Depending on the bacterial strains involved, the chemical environment, proper operation and maintenance, and the availability of nutrients, other less-desirable selenium species may be formed by bioreactor systems. Figure 1 shows a chromatogram of an effluent from a bioreactor used to treat a wastewater initially containing only selenite and selenate. Of particular note are the appreciable concentrations of the reduced selenium species, selenosulfate and selenocyanate (SeCN), as well as the organic selenium species that are present. While the toxicity of all these species have not been fully characterized and their bioaccumulation can be influenced by other constituents in the water, it has been shown that the bioavailability of certain species like selenomethionine can be several orders of magnitude higher than those of inorganic selenium. 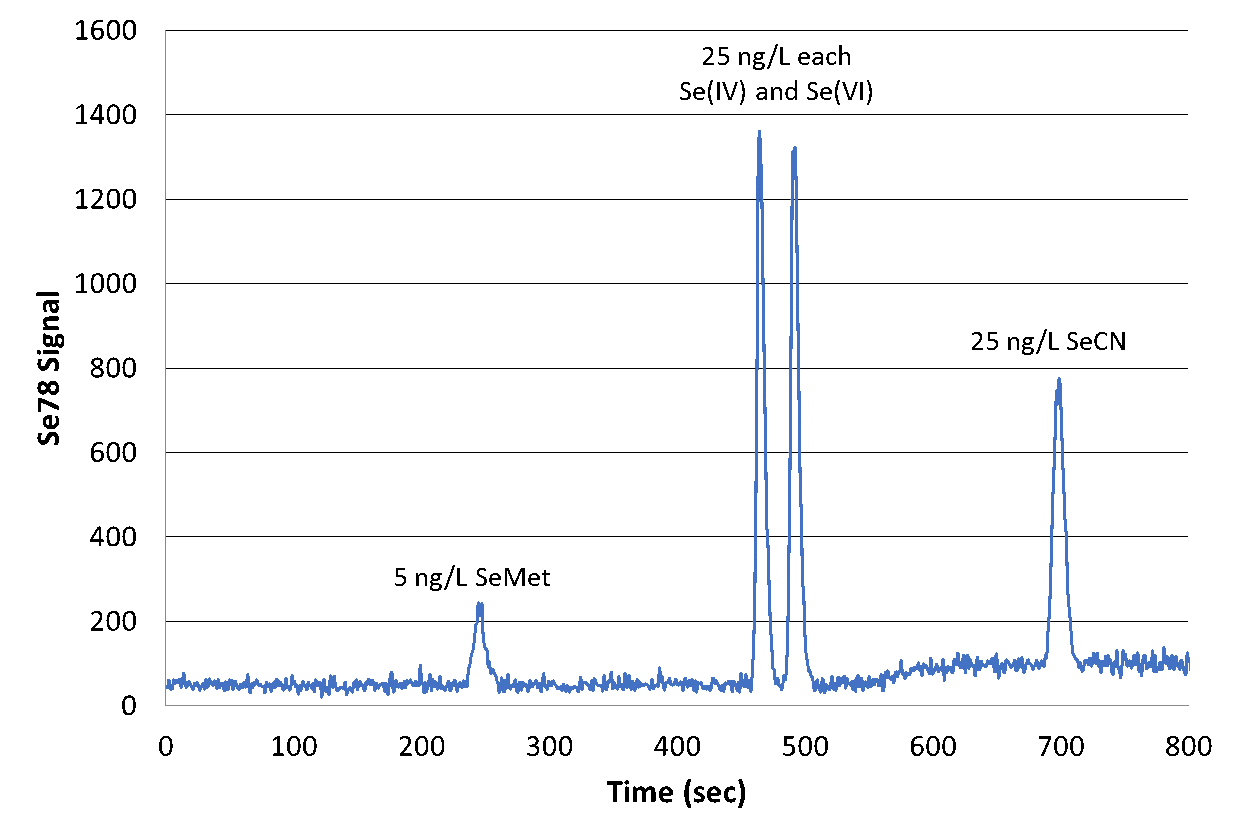 Since the goal of the treatment process is to reduce the uptake of selenium in the aquatic environment, conversion of inorganic selenium into forms that are significantly more bioavailable must be avoided. Otherwise, there is the potential that the treatment process itself will enhance the biomagnification of selenium. Methods that can quantify low levels of organic selenium species in the aquatic environment are also required due to the high bioavailability of these forms. Figure 2 shows an example of one such method performed at Brooks Applied Labs, high-performance liquid chromatography inductively coupled plasma collision reaction cell mass spectrometry (HPLC-ICP-CRC-MS). Using this method, selenomethionine can be reliably quantitated down to 5 ng/L (or part-per-trillion, ppt) in natural waters and certain industrial wastewaters. 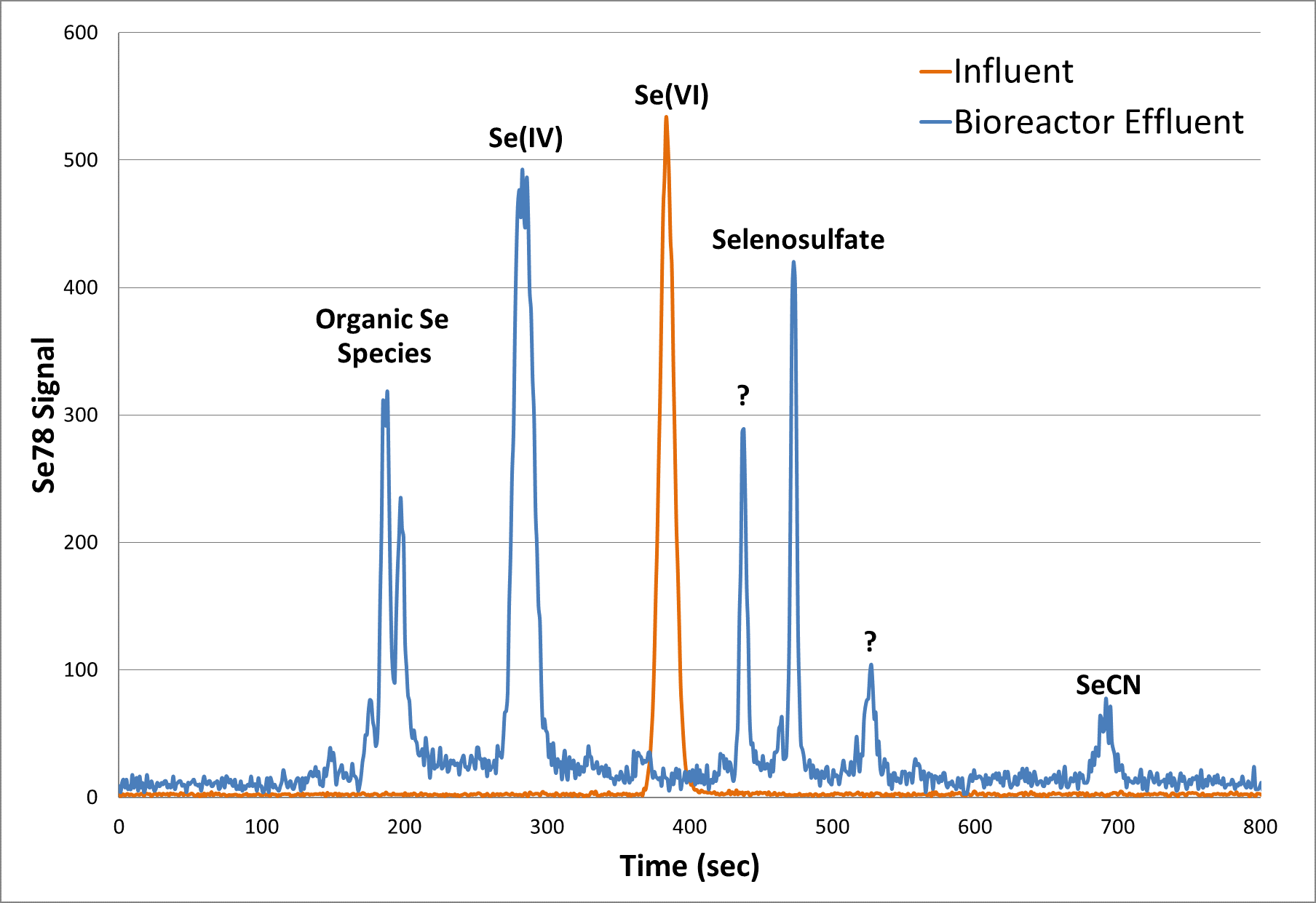 Selenium speciation analysis is essential for not only selecting an appropriate treatment system but also monitoring its performance, thereby increasing the probability that it serves the goals of mitigating selenium ecotoxicity and corporate liability. Routinely monitoring the speciation of the effluent (in addition to standard parameters such as pH and ORP) allows system operators to make timely adjustments to maintain optimal reactor performance.  To find out more about how Brooks Applied Labs can support your selenium treatment system, please contact us today!
← Arsenic and Lead in Fruit Juice In Case You Missed It →