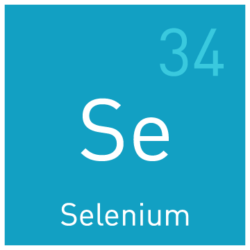 Although selenium is a component of many minerals, it is only the seventieth most abundant element in the earth’s crust and occurs mostly in small crystals and in small quantities. It typically only occurs at elevated concentrations in the environment as a byproduct of anthropological activity. An essential micro-nutrient, selenium becomes toxic to most eukaryotic organisms at relatively low concentrations.

The table below lists the different isotopes of selenium and the common interferences that can affect measurements at those isotopes.

A recent epidemiological study showed a strong correlation between selenium intake and COVID-19 mortality. Statistical analyses conducted on cure rates in various regions in China showed significantly lower cure rates in regions where the populations are known to have...

When evaluating the selenium (Se) speciation at a site, sometimes things don’t add up – that is, the sum of detected Se species might be significantly lower than the associated dissolved Se result.  Incomplete mass balances are often concerning, since they raise...

The monthly Brooks Applied Labs (BAL) newsletter contained many interesting and informational articles over the past year. To start off 2020, here's a recap of the most popular newsletter pieces from the past year (click on link for the full article): Choosing the...

Se and Hg in Fish Collected Near Power Plants

The Importance of Selenium Speciation

The topic of selenium has garnered attention in various industries for decades now, but the challenge associated with removing selenium from wastewaters has not diminished. In order to understand the most effective form of treatment for this unusual element that is...

BAL is On the Road Again…

The SETAC North America 39th Annual Meeting will be held in Sacramento November 4-8 this year. Come learn more about the unexpected ways alligators can potentially cause you harm you when Elizabeth Madonick, BAL Technical Services Specialist, presents a poster on the...